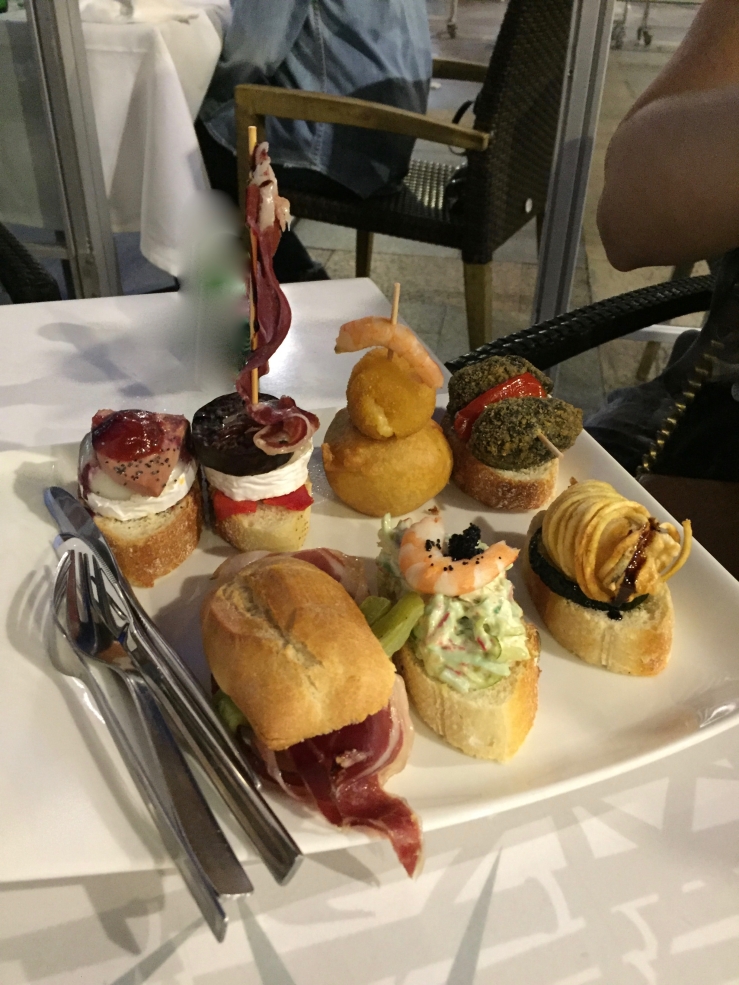 Pintxos – the small, Basque bar snacks – are one of my favorite things in the world.  For those not familiar with pintxos, the most common form is something on a slice of baguette.  The platter above, from the excellent, low-key Bar Charly in Bilbao, begins to give some idea of the range of options, running from jamon serrano to squid croquettes to pate to, of course, morcilla. Charly’s blood sausage pintxo the night we were there in 2017 was: a tower of red pepper, goat cheese, a slice of morcilla, topped off by a sail of jamon Serrano.

Part of the reason I love pintxos is just because of the extraordinary food cultures in Spain generally and in Basque areas in particular. Those cultures result in thousands of different little delicious bites in thousands of bars and restaurants. Much has been written about those cultures, and I’ll refer you to the experts for more information. (For example, check out Matt Goulding’s Grape, Olive, Pig: Deep Travels through Spain’s Food Culture).

However, the other part of the reasons I love pintxos, is that they offer a low-risk method of trying new foods.  I think one of the reasons we can be limited in our food choices is that trying new things is often a risky investment.  It’s not hard to see why most people are reluctant to go out to a restaurant and order a full entree of blood sausage, or cuttlefish, or chicken liver, or whatever new food represents the next frontier you might like to cross.  It’s expensive and wasteful and potentially embarrassing if you really don’t like it – or don’t like it enough to eat a whole plateful. And trying to cook something new at home has similar issues, plus the time investment, plus uncertainty over what the new ingredient is supposed to taste like.

Pintxos are a couple of bites, and a couple of euros.  And so, to borrow from economics, the ‘barriers to entry’ for unfamiliar-food pintxos are therefore pretty low, both financially and in terms of potential embarrassment.  Plus, I’ve also found it’s much easier to acclimate yourself to something unfamiliar a few bites at a time rather than trying to force down a whole plate at once.  Over the past few years I’ve really come around on both boiled eggs and sardines, for example. I’ve been lucky enough to have semi-regular visits to pintxo bars in that time, and I credit those small-dose pintxo exposures to helping move me along towards liking both.

Authentic pintxo bars are a great place to expand your horizons, because of both the quality of the food and the Spanish openness to offal, a wide range of seafood and some unusual vegetables. But of course, most of us don’t live in Bilbao. Nonetheless, the growing popularity of ‘small-plate’ restaurants (Spanish or otherwise) in the US, Northern Europe, and other parts of the world that have long had a starter + entree dining tradition opens up opportunities. They lower the barriers to trying something new.

And of course, Spain is far from the only country in the world with a culture of small dishes. It’s the one I know best, and so the once I chose to focus on here, but the same principle applies to everything from Mexican tacos to Japanese yakitori chicken skewers. If you want to try something new, seek out whatever small-dish restaurants are nearby, and see what’s on offer, for low risk and potentially big reward.